Cranbourne agent up with the best

A FORMER Carrum Downs truckie is mixing it with the real estate aristocracy of Toorak, Brighton and Kew.

Cranbourne  real estate agent Matthew Dewan has been listed at No.27 in Real Estate
Business magazine’s list of Australia’s top agents, a list usually dominated by agents based in Australia’s snootier suburbs.

In sales volume, Mr Dewan was listed as equal sixth in the country. Last year, he sold 102 properties in the Cranbourne area, earning $1,065,000 in commission for his agency, Ray White Cranbourne. 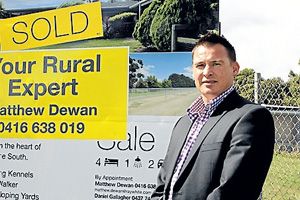 Ray White Cranbourne director Mark Guthrie said Mr Dewan had had a meteoric rise since coming into his agency four years ago to ask for a job.

“He’s one of only two agents listed in the top 30 with less than five years’ experience.”

In March, he was recognised as the top residential agent out of some 10,000 agents working from more than 1000 Ray White offices in Australia and overseas.

Mr Dewan grew up in the area and lives on a small rural property in Carrum Downs.

Another agent from Ray White Cranbourne, Paul Ringeri, came in at 93rd spot overall in the Real Estate Business listing and in the top 20 for volume, with 85 sales in 2011.